HomeFORUM
The Euroarab Foundation holds the first International Forum on Euro-Amazigh Research. Ittook place in the city of Granada, on 5 and 6 November, organised by the Euro-Arab Foundation and the Foundation Doctor Leila Mezian.

The Forum, part of the International Chair in Amazigh Culture, will feature the participation of relevant specialist from Algeria, France, Morocco, Portugal, Spain and the United States. This event, organized by the Euro-Arab Foundation and the Foundation Docteur Leila Mezia and with the collaboration of the French Alliance in Granada, seeks to set up a common space for meeting and dialogue between researchers and institutions, leading to create telematic networks to work jointly on the area of Amazigh culture.

The Forum was structured on the basis of seven themes:

Influence and contributions of the Amazighs on the European civilization in the pre-Islamic period;

arrival and settlement in the Iberian Peninsula, political history of the Amazighs in Al-Andalus;

legacy and cultural heritage in al-Andalus; social history of the Amazighs in the Iberian Peninsula;

reviewing the Berbers in the history of Al-Andalus;

the Berbers in the historical novels about Al-Andalus. 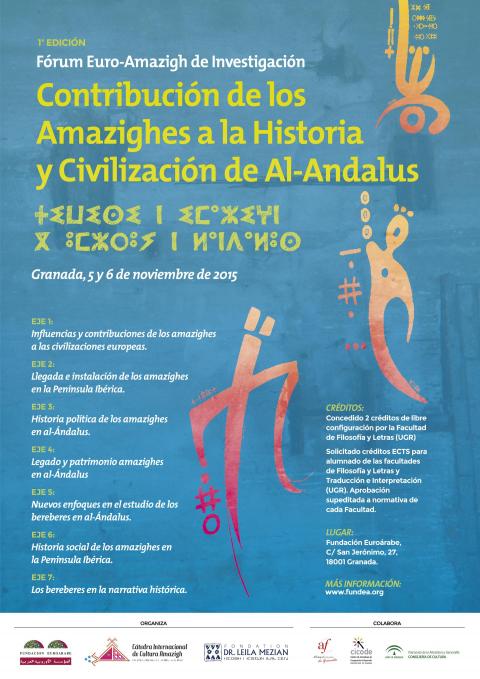 Among the targets of the Forum, we would like to highlight the intention of setting up a space for contact between researchers and institutions that leads to the creation of networks, facilitating them joint work and collaboration on this field.

The first historical references that point out the existence of economic, cultural, social and political ties between the Amazighs and the European and Mediterranean peoples (Iberians, Phoenicians, Celts, Greeks, Carthaginian, Romans, etc) dates back to oldest times, and they have been mentioned by some of the fist historians such as the Greek Herodotus, the Roman Salust, and the Berber Saint Augustine.

In modern times, the interest of the Europeans in the Amazighs gains major importance from the XIX century, following the first researches carried out by European explorers in the North of Africa. Thus, scientific and academic research multiplied during the colonial period. All this has led to the creation, in the last decades, of departments focused on Amazigh studies in several European Universities.

Nonetheless, still we find that this people and its relevant contributions for the Euro-Mediterranean civilizations is often not very well known in Spain. For centuries, the Amazighs have contributed to the basis of an Islamic civilization in the Iberian Peninsula; leaving their mark in all the spheres of the history of Al-Andalus, such as values, arts, science, law and tradition, socio-political and economic organization, architecture, toponymy, monuments, among others. 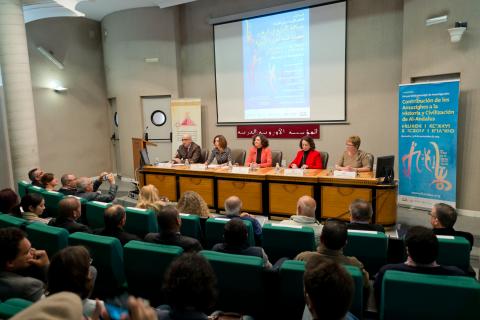 At the same time, this Forum presented several performances as: the exposition of 'La simbología en la cerámica bereber rifeña'  and two workshops, cerámica bereber,and escritura Tifinagh, gave in some colleges of Granada.